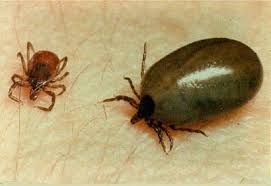 This week we’re going to talk about the Black-Legged Tick, also known as the Deer Tick.

This tick is of particular concern because it spreads Lyme disease. Dogs and humans are both susceptible to this disease.  Cats can get it but it is rare. Lyme disease is a debilitating disease that can be difficult to diagnose.  Early signs of the disease in humans are a rash (sometimes shaped like a target, or bull’s eye which is also known as Erythema migrans), fever, chills, headache, fatigue, muscle and joint pain, and enlarged lymph nodes. If left untreated Lyme disease may have severe symptoms such as severe headaches, additional rashes, Bell’s palsy, intermittent joint, muscle and tendon aches, a heart disorder known as Lyme carditis, neurological disorders and arthritis with severe joint pain and swelling.

The Black-Legged Tick is a well-known vector of Lyme disease.  First discovered in the 1970s in the area of Lyme, Connecticut, this tick was found mostly in the eastern United States. Originally coming to Canada as a hitchhiker on a bird or a deer, the tick has finally taken hold and is now breeding here, no longer needing a mode of transportation. Researchers in Canada are warning that climate change is causing Canada to become increasingly habitable to the Black-Legged Tick and they expect these ticks to continually migrate to regions all across Canada. 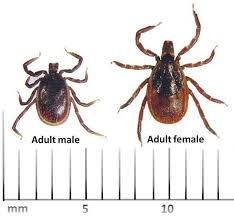 A recent article in the Sachem, a Haldimand County publication, stated that Hamilton and a northern portion of Haldimand County (near Caledonia) have been deemed a risk area and have been added to a Public Health Ontario Lyme disease map which health care workers

can refer to do during a diagnosis. Hamilton and Haldimand County have both launched an active tick surveillance program to track the number of black legged (deer) ticks in their area, and are no longer accepting ticks from the public for identification. Information about Lyme disease in Brantford can be found at the website of the Brant County Health Unit at https://www.bchu.org and the Canadian Lyme Disease Foundation at https://canlyme.com/lyme-prevention/risk-areas/.  Please remember that even outside of known risk areas, Black Legged ticks can be found just about anywhere.

Less susceptible than us to Lyme disease, our 4 legged friends are still at risk when bitten by a Black-Legged tick. Just the same as humans, the disease can show intermittent signs and be difficult to diagnose.  Cats are less prone to contracting Lyme disease, or other tick-borne diseases, because they tend to remove ticks through the grooming process. Dogs are not so lucky. Lyme disease can manifest with achy, painful joints accompanied by lethargy and loss of appetite. In some cases signs may not show for months. In severe cases dogs can develop heart disease, central nervous system disorders and kidney failure.

There are four steps that you as a pet owner can take to reduce the chance of exposure to Lyme disease: 1. Avoidance:  Black-Legged ticks live in wooded, brushy areas, waiting for their host on the tips of low-lying vegetation and shrubs. 2. Tick checks and removal: Check your dog daily for ticks. If you find one that has attached itself within 24 hours it will not have had enough time to transmit Lyme disease. You can remove the tick yourself with a pair of tweezers. Grasp the head of the tick as close to the skin as possible and firmly pull straight out. This should remove the mouth parts. Try not to twist or crush the tick and do not try to kill it by smothering it in Vaseline or nail polish. 3. Tick prevention products: Our veterinarians and staff can help with deciding which one is best for your pet. 4. Vaccination: Vaccinating healthy dogs for Lyme disease as early as 12 weeks of age will protect them from contracting the disease.  Two vaccinations are required 3-4 weeks apart, then once a year after that. A physical examination and discussion with your veterinarian can determine if your dog is a good candidate for Lyme vaccine. 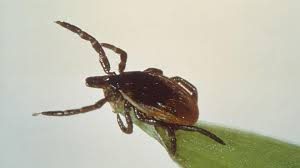 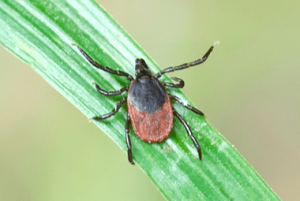 Here at Scott Veterinary Clinic we can test for exposure to Lyme disease with a Snap 4DX Plus blood test. The Snap 4DX Plus test screens your dog for Lyme disease, Ehrlichia, Anaplasma which are all tick-borne diseases and tests for Heartworm disease as well. If your dog tests positive for Lyme disease further tests can determine if he actually has an active infection.